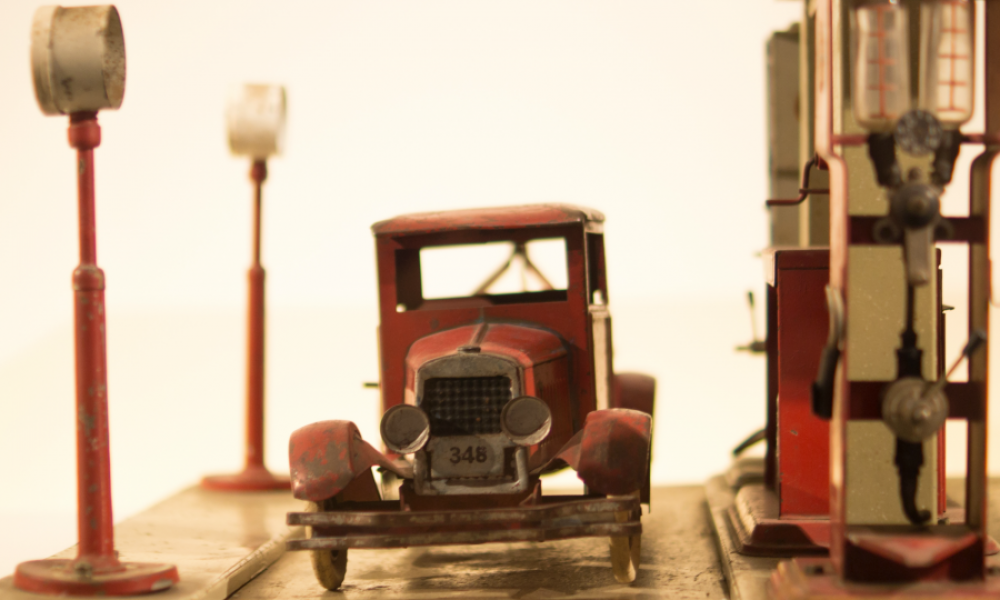 How the Appropriate Unit of Comparison for Going-concern Valuation, Substantiated Through Regression Analysis, can Provide a More Precise Appraisal

The process of commercial property valuation is often viewed as a mystery, or more dangerously, as a simplistic process of data compilation. Value, however, is determined by complex interactions between market participants, real property, and often the operating business as is the case with going-concern valuation and gas stations.

Going-Concern Value is defined as the value of a business enterprise that is expected to continue to operate into the future. The intangible elements of Going Concern Value result from factors such as having a trained work force, an operational plant, and the necessary licenses, systems, and procedures in place.

How does an appraiser consider all these factors in their going-concern valuation? How does one measure the financial benefit of a successful business operation compared to an inferior one? One of the first challenges that an appraiser faces in estimating going- concern value is selecting the most appropriate unit of comparison. There are several methods employed by an appraiser to value the going-concern. In this article we focus on the relationship between gross profit per square foot and the going-concern sale price

per square foot. Going-concern value is a function of sales, profit, expenses, volume, margins, and so on. When considering a going-concern the appraiser must decide what unit of comparison will be utilized to prescribe the most accurate market value to the going-concern. In other words, which comparison has the most consistent relationship to the sale price? A reliable way of determining which comparison is the most reliable is through regression analysis.

A conventional Sales Comparison Approach based on price per square foot or other physical traits such as number of pumps, land area, or fueling positions is not considered meaningful for going-concern gas station valuation. Such an analysis may be appropriate in the Cost Approach for estimating underlying land value, it is not considered appropriate when appraising gas stations as buyers and sellers rely more so on sales volume, profit, and net income, and less on the size of the building or number of pumps.

Based on Retail Petroleum’s proprietary data base of hundreds of gas station going- concern sales and over 5,000 gas station appraisals, the most meaningful unit of comparison with highest R-Squared is consistently gross profit per square foot versus sales price per square foot. This relationship is depicted in the following chart.

The price per square foot unit analysis is commonplace methodology used by many appraisers for fee simple improved properties and land valuation. This approach is problematic for gas station going-concern valuation. Because two identical properties could have very different cash flows, the use of price per square foot analyses or other physical unit of comparison without adjustment for cash flow characteristics often leads to misleading results.

Obviously, a property that has more income per square foot should sell for a higher price, all other factors being equal and assuming gas station is the highest and best use. This is because buyers purchase gas stations based on their cash flow potential as reflected in the gross profit per square foot analyses. If we eliminate the gross profit variable in the regression analysis, observe what happens to the R-Squared value as shown in the following chart.

Our last regression analysis further reduces the variables to only price and building square feet. Note the reduced R-Squared value is now 0.4006. Acceptable R-Squared values vary according to property types, market conditions, and investor preferences. Though, there are no common rules of thumb, in or practice when R-Squared values drop below 0.5000 the relationship between the variables may be too weak for reliable going- concern valuation.

Note the yellow shaded area in the following regression chart based on Building (SF) Versus Sale Price representing the area in which the subject value should fall based on the comparable data set. This is much wider range than with the previous two regression indicators. The first regression based on GP/SF Versus Sales Price/SF with stronger R- Squared value supports a much narrower area of value. Conversely, the red line in the following chart shows the range in potential value from approximately $600,000 to $2,750,000. The range exhibited by the previous stronger R-Squared regressions was much tighter. 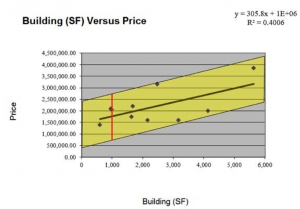 Within our own business practice, and exhibited herein, Retail Petroleum Consultants has created a comparative regression analysis based on the data we have compiled after nearly five thousand appraisals of gas stations, car washes, c-stores, and quick service restaurants. Through our research, as demonstrated by the regression analysis, we have found that Gross profit per square foot versus sales price per square foot has the strongest correlation (R-Squared) to the actual sale price of the going-concern. This valuation approach represents a crucial difference between the expertise of an appraiser specializing in going concern, as opposed to a generalist appraiser incorrectly employing per unit analyses based on physical characteristics.

When appraising a going concern, a generalist appraiser often mistakenly relies on the more simplistic method of comparing sales price per square foot. While this valuation is perfectly applicable for land valuation or fee simple commercial buildings, it can drastically alter the estimated value of the going-concern, most often resulting in overestimating value and real estate allocation while failing to adequately identify business or include value. Unlike gross profit per square foot, price per unit indicators fail to consider the cash flow potential of the going-concern, which is what buyers and sellers rely on when making sound going-concern gas station purchase decisions.

The results of this analysis indicates that the gross profit per square foot versus the price per square foot has the strongest correlation and is proven the best unit of comparison for going-concern gas station appraisal.

Going concern appraisals should be left to a specialist with experience to analyze gross profit and relevant financial measures. Unfortunately, information on gross profit from comparable sales can be difficult to obtain. Brokers generally sign nondisclosure agreements and cannot reveal an operator’s sensitive financial data and fuel volumes. Often the only way to obtain this data is by having appraised thousands of gas station properties and use of proprietary non-public data bases. An appraiser with access to a comprehensive financial database, such as that maintained by RPC, can perform more accurate valuations of a going-concern, as opposed to a generalist appraiser who generally lacks this resource.