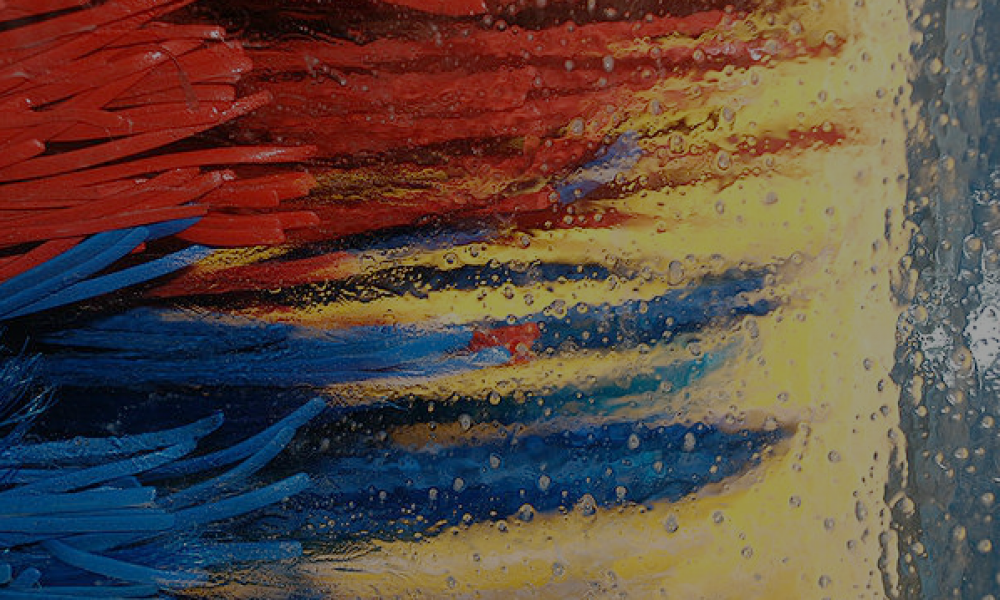 It’s no secret that with the advent and rise in popularity of the express-exterior car wash concept, the car wash sector was turned on its head. While the traditional flex-serve car wash built in the last half century tended to offer a range of wash options, the most common wash products offered included pricier interior and exterior cleaning services, with hand wash and dry amenities after running the customer’s car through the conveyor. Today, depending on the local market, the cheapest of these options generally begin at around $10.00, ranging up to $50.00 for the most expensive wash packages.  For their dollar, consumers could expect their car to be run through a conveyor wash tunnel, vacuumed, and hand dried, with a wide array of additional amenities available including spray wax, tire dressing, air fresheners, and many others, limited only by the operator’s creativity.

Beginning in the early 2000s, developers began to build express-exterior car washes, catering to time-starved customers with quick washes through modern conveyor tunnels. Since the car was being run through a conveyor tunnel, the wash product was generally superior to the in-bay automatics offered by gas stations but similar to the classic full- service washes, at least on the outside of the car. By offering a cheaper wash product (typically between $5.00 and $15.00 each) with minimal labor, car wash operators found they could attract a higher volume of customers. Customers never had to leave their cars except to vacuum them after the wash. 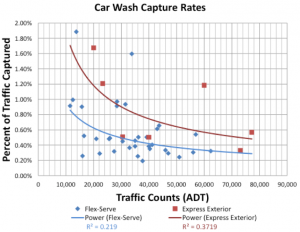 The chart at above compares capture rates between flex-serve washes and express- exterior washes throughout the southwestern United States, encompassing California, Arizona, and Nevada markets. The data represents car wash volumes on an annual basis, with operations taking place between 2011 and 2013, showing car wash capture rates based on traffic passing by the site.

The data for both operation types shows a generally declining capture rate as traffic increases. Since a particular site can only have so many cars on it at one time, each successive car becomes harder and harder to capture. Moreover, sites in higher-traffic areas are also most likely located on more expensive land (such as a downtown CBD location or in a particularly affluent area), which will generally translate into a smaller site. These smaller sites will have difficulty capturing higher levels of traffic due to a lack of circulation, staging, and parking areas. A potential customer confronted with a packed site is likely to go to a competitor, come back another time, or forgo the wash altogether. So this effect is not surprising.

The interesting thing to note about the chart, however, is the fact that the higher capture rate “bonus” exhibited by the express-exterior wash operations drops off as traffic increases. In other words, sites with extremely high traffic passing by along the fronting streets tend to have a lower premium in capture rates versus sites located in relatively less-trafficked areas. At the extreme ends, an average express exterior car wash with 10,000 cars per day passing by the site would be able to capture about 1.7% of the passing traffic along the fronting street. Meanwhile, a flex-serve wash with similar traffic counts could expect to capture about 0.9% of passing traffic, or about 52% as much. In contrast, an express exterior site in a high-traffic location with 80,000 cars per day could expect an average capture rate of about 0.5%, while a flex-serve wash in a similar location could expect a capture rate of about 0.3%, or 60% as much.

A similar, although more muted effect, occurs when looking at population density as a drive of car wash volumes. When examining the same data set of flex-serve and express- exterior washes over the same time frame but as a percentage capture of population within a 3-mile radius, the graph at left is generated. As would be expected, it shows express-exterior washes consistently generating higher volumes and again shows rates declining as density increases. In this case, it shows express-exterior washes in areas with a surrounding population of 40,000 residents could expect to capture about 0.7% of the surrounding population base, while flex-serve properties in the same area could expect to capture about 0.3%, or about 40% as much. But in high-density areas, the effect drops.

The average express-exterior wash in a location with a population in excess of 500,000 residents is almost identical to the capture rate of a flex-serve site. So regardless of metric, it appears that the “bonus” capture attributable to express-exterior car washes diminishes as the chosen metric gets larger. 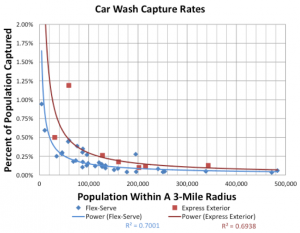 This effect is likely a result of the same phenomenon contributing to declining capture rates across the board as traffic counts get higher and population densities increase: site sizes generally remain the same or even get smaller, as commercial land gets more expensive. These smaller sites restrict capture since there is a finite amount of space for cars to stage, vacuum, park, and circulate, while still accommodating the wash tunnel, vacuum space, landscaping, and additional utility/office spaces.

Related to this phenomenon is the fact that as traffic/population density increases, with corresponding higher commercial land values, car washes tend to become an obsolete use of the site. Sites in areas with very high land values tend to require more intense development to take full advantage of that high land value and car washedo not usually fit the bill.

As a result, car wash competition in these areas of high traffic/density is likely much lower than a secondary suburban or rural location with lower densities. Secondary or struggling car washes were likely redeveloped into a higher and better use long ago, leaving only a few of the primary sites as competitors. Since consumers have fewer wash options overall, the distinction between flex-serve and express-exterior car washes become a moot point.