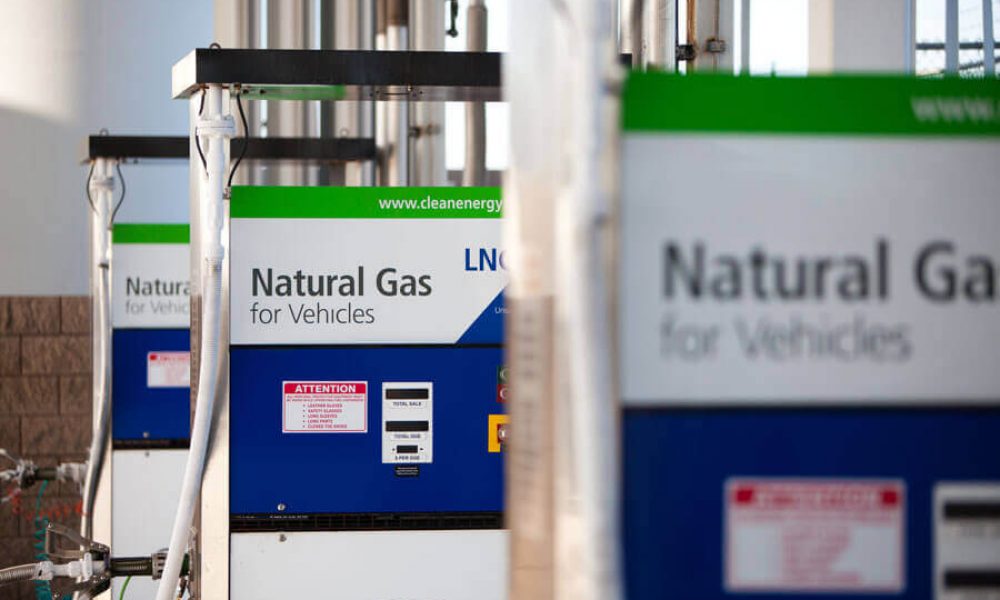 In the realm of potentiality, where does Compressed Natural Gas stand?

A shift is evident as new alternative fuels become more readily available and accepted by the general public.  One of those fuels with promising potential is CNG.  Its clear to see increased use, production, and transition towards this fuel source over the past several decades based on the EIA (Energy Information Agency) chart below. 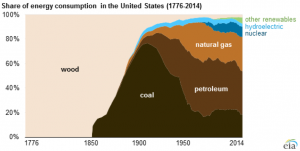 CNG and LNG stand for Compressed Natural Gas and Liquefied Natural Gas respectively.  Natural gas is a clean-burning alternative fuel, which has become increasingly popular for use in private, commercial, and public transportation vehicles, due to its lower emissions and cost, compared to conventional fuels.  With improved technology, it will be possible to have fewer emissions than what power plants produce to power electric vehicles at the same rate.  Engines tend to run quieter than their diesel equivalents with similar efficiency.  CNG is significantly less expensive than gasoline or diesel.  It remains one of the cheapest ways to power vehicles and machinery at about half the price of gasoline.  It is also one of the most abundant fuel sources available, especially in the US where natural gas represents 26% of its total energy sources.  Unlike petroleum based fuels that are expensive to extract and refine, natural gas has much lower extracting costs and no refining.  LNG is more expensive than CNG as it must be cooled for storage but is more readily available than CNG since it does not require pipelines for delivery and transport.

According to the United States Department of Energy, natural gas accounts for roughly 25% of the energy consumed in the United States with some exports, especially to Mexico.  About one-tenth of 1% is being used to power vehicles.  The California Natural Gas Vehicle Coalition counts over 170 public-access natural gas stations in this state alone with an increasing trend.

Compressed natural gas (CNG) is natural gas that is stored under pressure, at over 3,100 pounds per square inch.  Although CNG does not contain lead and the maintenance costs for CNG vehicles is reportedly lower than hydrocarbon-fuel-powered vehicles, CNG requires a greater amount of space to store than conventional fuels since it is compressed gas and not a liquid.  This affects fuel storage on vehicles as well as at distribution facilities.  This has been the primary hurdle for use in on road trucking where conventional diesel trucks have ranges of 1,000 miles or more based on 4 MPG and tank sizes of approximately 400 gallons (duel tanks of 200 or more gallons per side).  Liquefied Natural Gas (LNG) eliminates some of the fuel storage capacity issues with more efficient storage than CNG.  Residual gasses or “boil off” of LNG can be compressed and be stored as CNG.  However, there is more risk with LNG given its more volatile nature.

CNGStations.com states on their website that there are close to 120,000 NGVs (Natural Gas Vehicles) in the United States; the most of them consisting of trucks and municipal vehicles.  Altogether, there are about 10 million natural gas powered vehicles in the world with a significant amount of vehicles in China.  To cater for this need, it is estimated that there are only about 14,500 alternative fueling stations in the US with well over 700 CNG fueling stations on a national scale, including non-public stations increases these figures significantly.  Only about half of these stations are made open to the public.  In contrast, there are more than 125,000 gasoline stations in the US.  Many vehicle owners are reluctant to switch to CNG as an alternative fuel because of the difficulty to refuel if they drive to locations that are not equipped with CNG stations.  Furthermore, EPA (Environmental Protection Agency) and the California Air Resources Board (CARB) have strict certification and compliance requirements further complicating CNG fueling.

The cost of converting or building a new facility to store and dispense CNG can be costly, which may have hampered increases in the use of this fuel.  Conversion is also a liability and has inherent risk not to mention CNG is a highly flammable gas at very high pressures.  NGV.com (Natural Gas Vehicles) estimate typical conversion costs from $8,000 to $16,000 with only certain vehicles approved for conversion including the Chevy Silverado, GMC Sierra, Ford Crown Victoria, Ford Grand Marquis, Ford Taurus, Lincoln Town Car, Ford f-150, 250, 350, 450, and others.  The initial investment to convert or develop a facility, along with the ongoing maintenance costs, have been a large concern, considering the number of CNG vehicles on the road is far less than vehicles using conventional fuel.  If a company or civic municipality decides to convert their fleet or transit vehicles to CNG, the initial investment can be amortized over a period of time, helping them to realize cost savings and benefits into the future.

Natural gas production in the US was at an all-time high as of March 2014 with the EIA quoting 72.7 Bcf/d (billion cubic feet per day).  The market forecast for 2015 is neat 75.0 Bcf/d.  Most US production of CNG is primarily from gas wells and shale gas trapped in fine grained sedimentary rocks.  RNG (Renewable Natural Gas) as favored by the EPA includes bio methane from sources including landfill gas, wastewater treatment, algae growth, etc., that can be processed and used as CNG.  These discoveries have increased production significantly since 2007, reducing costs to consumers and manufacturers increasing consumption.

Natural gas prices are affected by supply and demand with limited alternatives for production near term resulting in wide price swings when near term demand shifts.  Simmons & Company estimates demand for US produced natural gas will increase from its current high at about 73.0 Bcf/d to nearly 90 Bcf/d by 2020.  Mexico is one of the greatest consumers of US natural gas with pipelines being created to serve this need in Arizona and Texas.  Additional sources of demand include China who gets 5% of their total energy from natural gas compared to the top producer, the US, who gets 26% of their total energy from natural gas.  Conversely, China has 1.5 million NGVs (Natural Gas Vehicles) compared to the US with only 250,000 NGVs.  The price of natural gas is relatively cheap and about one third the price of gasoline in the US and one fourth the price of CNG abroad giving US manufacturers using natural gas a competitive edge. 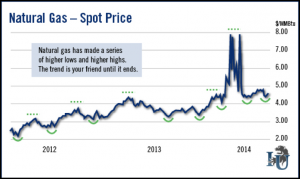 Most industry experts (excepting the Major Oil Companies with a stake in continued petroleum use) see a positive influence on local economies due to CNG production and use.  California’s Low Carbon Fuel Standard (LCFS) requirements for 2020 will only enhance continued use and production of CNG.  According to ICF International “LCFS compliance could create 9,100 new jobs in California and result in $1.4 billion to $4.8 billion in social benefits, such as reduced air pollution and increased energy security by 2020”.  This will enhance and provide increasing motivation for continued development of alternative fuels and CNG.  Furthermore there are significant incentives and grants for alternative fuels with the Renewable Fuel and Vehicle Technology Program (AB 118) calling for $10.0 million in NGV purchase incentives, $1.5 million in infrastructure, and $20.0 million in biofuel production.  An additional $16.0 million was approved for 2,572 light to heavy duty vehicles.  Research into hybrid NGVs continues with the CEC (California Energy Commission) providing $2.7 million in grants.  Westport who manufactures CNG engines is offering 1,000 dges (diesel gallon equivalents) though 150 Ford dealerships with CNG provided through Clean Energy stations up to 750,000 gge (gasoline gallon equivalent).  Vehicles must be purchased by the end of 2014 with fuel credits used by 2019.

In 2013 the Los Angeles Public Works Fleet converted to NGVs.  The Los Angeles Department of Water and Power received a $300,000 grant for a CNG station.  These same grants help to fund a two dispenser facility operated by Trillium off Highway 99 in Tulare, California similar to the subject.  Trillium plans on building 3 more CNG stations by the end of 2014 in California with additional stations planned for Texas and Ohio.  Trillium in a CNG leader stating “We don’t build anything unless we have a contract with someone whose going to use it, and then those customers will phase in NGVs over the course of say 3 years”.  Most Trillium facilities include four or more vehicle fueling lanes with pumps dispensing 10 dge per minute.  These facilities primarily represent non-public access stations with public access stations and use increasing.  Of the 40 million gallons of CNG though Trillium facilities in 2013, 36 million were to non-public users with the remaining 4 million to public users.

There are two primary types of CNG fueling stations; fast-fill and time-fill.  The subject represents a combination of these stations offering both fast-fill and time-fill.  Fast-fill includes high pressure fueling that takes about the same time as filling a diesel tank would.  Because of the heat created through gasses flowing through the lines, total fuel capacity is reduced.  Fast-fill stations can be located on relatively small sites with the equipment taking up an area not much larger than a parking space.  Fuel is delivered to the station via local utilities through underground pipelines at a much lower volume than when dispensed to customers requiring the need for compressors and secondary storage.

Time-fill stations on the other hand use lower pressures and can fuel multiple NGVs at once, but at a much slower rate than their fast-fill counterparts.  These facilities are best suited for fleet fueling where vehicles can be stationary for several hours during fueling.  Time-fill stations ensure a complete fill at 3,600 psi.  Storage is not generally necessary are vehicles are filled directly from the utility’s gas line via a gas compressor. 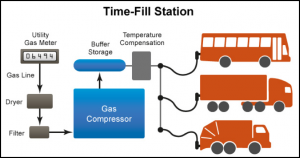 CNG dispensers have a similar appearance as a diesel dispenser.  According to Cummins – Westport a typical CNG fueling station includes a compressor, gas dryer, storage vessels, dispensers, and underground piping.  An LNG station includes LNG storage, a pump/dispenser, and underground piping.  LNG fuel is dispensed as a liquid similar to gasoline or diesel but at much colder temperatures (-260 degrees Fahrenheit) requiring the user to wear gloves and protective clothing to avoid freezing burns.  Cost for stations varies greatly depending on application.  The EIA reports average pricing for LNG facilities between $1.0 and $4.0 million.  CNG facilities are priced much lower with the Department of Energy quoting an average price of $400,000 for a small fast-fill station and upwards of $1,700,000 for larger facilities.

Based on cost and availability CNG should prove to be a recognized and abundant fuel source in the United States for years to come.  Infrastructure is already in place with most homes plumbed for natural gas.  Conversion of gasoline engines is relatively simple though costly.  CNG’s greatest hurdle is storage capacity and range, limiting its use in trucking and long haul transportation.  For the commuter traveling less than 100 miles round trip CNG may someday prove to be the go to fuel source.